The ABCs of Vanuatu

I've been living in Vanuatu for over three months now, and while I'm no expert, I have learned some things about this beautiful country.

Yes, you could just Wikipedia the country and learn some basics, but then you aren't allowing me a blog post on the subject, are you? 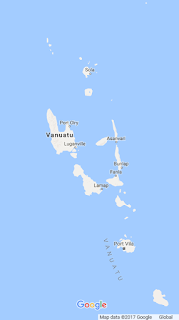 The tusk on the flag (the swirl around the leaves) represents the kastom way and Melanesian values. The leaves are namele leaves. They represent peace, and are an important part of Vanuatu's culture. They are used to protect land and places. If you want to indicate to others that a beach is off-limits for fishing, you place namele leaves nearby. In certain islands' culture, the chiefs can touch a leaf on land or buildings to claim them as his own. You can place a leaf in front of your garden so no one removes food from it.

There are six provinces of Vanuatu, and they are all named after the island groups of which the province is comprised of.

Each region is known for certain things, just like in the USA. These are those things (both things of interest to locals and to visitors), as told to us by one of our language trainers.