The Ordination of a Paramount Chief, Part 1

The paramount chief is the chief of all of the villages of our island and the neighboring island of Pele. Each village has their own chief as well as other, small chiefs, which carry weight but not as much as the paramount chief.

After Chief Meriwota, the paramount chief of Nguna and Pele, died last year (around May 2017), his title (the name Meriwota) passed to his widow, Tessy. His son’s name changed from Peter to Chief Kolau, which everyone in the village calls him.  The Meriwota name cannot be passed to Peter until an official ordination ceremony. This was supposed to happen last year, but it was pushed to this year, after Kolau’s wedding (which happened in July 2018).

In the interim, he has the title Chief Kolau, which is something like a temporary title to indicate that he will soon be the paramount chief.

This morning began the process.

Before lunch today, Tessy walked to the nakamal, or meeting place, in the village, carrying two white mats (with white feathers) and a pig. Mats here are woven of pandanus leaves, and are usually quite colorful and given on all kinds of occasions from birthdays to weddings. These, however, were a plain white. She carried the mats and pig with some assistance from family. When she arrived at the nakamal, she placed one mat down on the ground and the pig on top. She gave a short speech to transfer the Meriwota name to the nakamal, and passed the second mat to her son, Kolau. He responded and handed a regular mat back to her in the exchange. Now, the nakamal holds the title, and it has become a very sacred place, until the title is passed to Kolau.

Last week, small temporary shelters are built around large pits in the ground near the nakamal. Yesterday, other tall wooden stakes were placed in the ground where tarps and sheet metal could be placed to block wind from the fire pits.

This morning, each family group brought a pig and baskets of vegetables to the nakamal where Chief Kolau is. He thanks them for their contributions, and then they move on to the cooking area to begin their food prep.

Today, around 1pm, the food prep began. The mamas arrived to their designated fire pit (they are labeled by family names written on cardboard and placed on a stick) and began building the fire. As the fire grew, they used the time to peel all of the vegetables to be placed in the bunia that they will soon cook. They also use the time to kill the pig, wash it in the ocean, and burn the hair and skin off. I saw some of the latter, as two men tied ropes on a pig and I watched them drag it back and forth across a pit of hot stones as the flesh turned black. After that, they peeled off the skin and the cooking process was ready to begin.

I speak with Aunt Sarah, my host mother’s sister who lives on Pele. She is here with friends from her village, and they have a fire pit where they’ve been preparing food since the early afternoon. She explains that every fire pit contains or will contain bunia, a local dish comprised of yam, taro, manioc, island cabbage, kumala (sweet potatoes) and coconut milk. I ask if laplap will also be prepared, and she says no, bunia is the ceremonial dish for these kinds of events.

Beside the fire pits, there are piles of intestines and innards of the pigs that were gutted. Surprisingly, the dogs are not sniffing around the guts, but instead around the blood that was shed on the grass by the pigs earlier.

When I first arrived, it appeared to be an even mix, if not swaying more towards a female populace during the food prep. Now that it’s nearing 4 o’clock, I’ve noticed that it’s mostly male. Sarah explains that now that the food prep is over, the men deal with putting the food on the fire, as the fire is too hot and too big for the women to handle. I joked with her that all the mamas work in front of fires every day at home, but she insists these are too big.

As a group of men clears the fire pit of wood and lays down the leaves, they begin to chant. I ask some of the nearby children what the song is about, as it’s in the local language (not Bislama, which I have learned and understand). None of the children understand it, though, because it’s from the old language from long ago, which has morphed over the years to what it is today. I even ask some nearby adults and they don’t know, and instead offer that I ask the men directly.

One of the men steps aside from the fire pit and tells me he is from one of the villages in the bush, Malaliu. He tells me the song is an old custom song, and the gist of it is that one man is asking “Is it good or bad?” And the response of the group is, “Yes, it is good.” 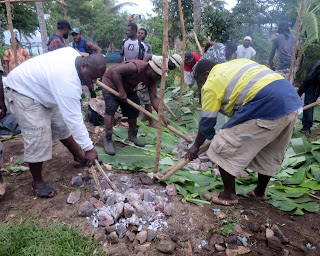 I notice, after observing several assemblies of the bunia, that one of them is assembled differently. The usual pattern so far has been a hot pit (where fire once was) that is covered in banana leaves, then the vegetables (yam, taro, manioc, kumala, island cabbage), coconut milk, a splayed pig, and then the leaves again before the hot rocks are placed on top and covered to stay insulated for the slow, overnight cooking process to begin. Basically, leaves are used as the top and bottom to protect the food from touching the rocks or the dirt. However, in this latest iteration, I notice that the hot rocks are placed directly on the vegetables before the pig is thrown on top, resulting in a loud sizzle as the open flesh touches the surface of the rocks. I ask some people nearby why this one is prepared differently. They simply say “it’s just a different way.” I find it interesting that all the others were protected by the leaves, but in this one, the food touches the rocks directly.

One kid walks around with a huge hunk of meat on a stick, passing it around a circle of children, who each take a bite.  I ask Annie, a year 9 student, what they’re passing around. She explains that it’s the liver or heart or some innard of the pig that a kid just jammed on a stick and leaned over a fire.

SDA, or Seventh Day Adventist, churgoers abide to a special diet which reminds me a bit of a Muslim diet, in which they don’t consume pork or alcohol or smoke cigarettes (this is something I always note to my village friends, because I want to take the fear and “otherness” away from Muslims in America and elsewhere). Therefore, there is a special bunia prepared with beef instead of pig. As the men prepare this final bunia and begin to remove the wood from the fire, I see Tawia from class 4 run up to a stick that’s leaning against the fire. It has a hunk of meat on it. He grabs it and starts gnawing on it as the men pass him to build the bunia.

Elder Abel walks around the food pits and talks in language. I ask a friend to translate, and he says that the bunia that is prepared here is not for the lunch tomorrow. I am quite surprised, as I assumed all this food preparation was exactly for that. But he says no, this food is for all the people who helped in the ceremony to take home with them and eat at home in the afternoon. The food for lunch tomorrow is prepped separately at Kolau’s house and the churchyard.

I discover that there is a “task force” (yes, that is what they called it) assigned with the entire organization of this event. Elder Amos, the school chairman, is also the chairman of this task force. He explains to me that there’s a financial officer as well, to sort out the sponsor money. Various organizations, including the school, provided monetary donations to the event to cover costs of food, materials and labor. The task force is also comprised of a couple small chiefs who are now busy participating in the event itself.

I talk to Amos near the nakamal, which has a shelter nearby with long dining tables inside. He explains that this is the place for sponsors to eat lunch tomorrow during the big ceremony. In the nakamal, the small chiefs as well as Chief Kolau will sleep starting tonight until Tuesday (the fifth day).

A friend in the village, Anita, explained to me earlier this week that only the wives of the chiefs can serve food. Most people in the village provide raw vegetables to the nakamal in special baskets, but the wives do the food preparation and serving. It’s taboo for a “regular” villager to be serving the food during the ceremony.

As it nears the evening hour of 6pm, a man walks around the village on a loudspeaker announcing the plan for tomorrow. He announces that walking near the nakamal and food pit area tonight is forbidden. The road near the beach, behind the nakamal, is closed, and the walking paths on the other sides are blocked off until the events for tomorrow.

He announces that the ceremony tomorrow will begin at 10am, with the pig killing, the transferring of the chiefly title, and ceremonial kava, before lunch is served. A teacher tells me that it’ll start on “Vanuatu time,” ie, it will begin late.

I set my morning alarm for tomorrow and get excited for what’s to come.