Your first look at Kitty #2

Kalmataku went missing a few weeks ago, and never returned. I was in Vila for a day and when I came back, he wasn't there. He didn't come back the next day or the next.

Then, a couple weeks ago, I started hearing the rats on the roof. And a mouse came in the house. And Kalmataku's absence became more and more apparent with every scratch, every nibble, and every scurry of a rodent. It was time for a new cat. 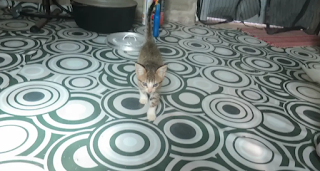 Leikas' cat had some kittens recently, but I was waiting a couple months for the kittens to be beyond breastfeeding age. Today, I found out from her granddaughter, Gloria, that all but one kitten remained, as people in the village were scooping them up for their own rodent needs.

After lunch, I walked over to Leikas' house, and asked for a cat. No problem at all, she said. We wandered in her house and one of her granddaughters found the kitty on a chair and effortlessly scooped it up. "Here you go!" That's it. That's the extent of pet ownership here.

Kitty's so cute, and is so different from my first kitty, Kalmataku. I miss Kalmataku, but I never cried over his loss. The tears I shed months ago were more out of moving homes than over a lost kitty. Kalmataku, with his distinct personality, will be missed. There will not be another.

Kalmataku was named so because he was a boy (Kal) and he was terrified of me on the first day we met (and the second, and third) and of anyone and everyone who came to visit (mataku=afraid in the local language).

I don't know new kitty's name yet because I don't know its gender and I don't know its personality. It meows a LOT, but it isn't terrified. I carried it the six-minute walk from Leikas' home with ease, with it burrowing its fluffy fur in my hands. It's more comfortable, and less scared and more confused.

We'll see what name it earns over the next week. For now, it's getting used to its new home. Have a look...


Update: I've named her Leikai, which is "the girl who cries" in the local language, being for her incessant meowing!